A Historic Address on LGBT Rights

This letter was sent to Horizons Foundation’s supporters after Secretary of State Hillary Clinton addressed the United Nations Human Rights Council on December 6, 2011, about LGBT rights.

I just saw something wonderful and astonishing. It came streaming live from the Geneva, Switzerland headquarters of the United Nations Human Rights Council. There, to mark International Human Rights Day, Secretary of State Hillary Clinton gave a speech an hour or so ago – calling for recognition and protection of the rights of LGBT people. Everywhere. “Gay rights and human rights,” she declared, “are one and the same.” 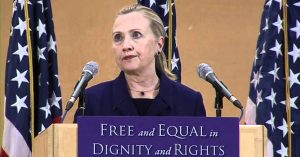 What happened this morning was once unimaginable.
Not many years ago, the United States government paid no attention whatsoever to the daily suffering and injustice experienced by LGBT people around the world. Today, the United States Secretary of State made our rights, worldwide, the focus of a major address at the United Nations.

(Yes, I know that last line repeats what’s above. I just have to say it twice. It’s that historic.)

Appropriately, Secretary Clinton acknowledged that the United States itself still has a lot of work left to do to protect LGBT rights. She recognized the many grounds on which people oppose us – political, cultural, religious – and said flatly that none of them serve as excuses. “No practice or tradition,” she stated, “trumps human rights.” She even took on several of the big lies about LGBT people – and knocked them down. (Read the text of the speech…)

Horizons Foundation isn’t an international LGBT organization, of course. So why am I writing this? The answer is simple. I believe deeply – and know that many of you do as well – that our quest for equality and justice in America, or even in the Bay Area, cannot be divorced from the struggle for LGBT rights throughout the world. An American Secretary of State would never have given a speech like this one absent a strong LGBT movement in the United States. And it’s countries like South Africa and Colombia and Spain that are leading other nations – including ours – toward marriage equality.

Even more fundamentally, the ties among us help define who we are. Notwithstanding all the obvious differences born of culture and geography among people around the world, LGBT people share, in one way or another, a unique human experience. And out of that experience – for so many of us – comes a common commitment to recognizing every human being’s essential dignity and worth.