Another hero leaves us 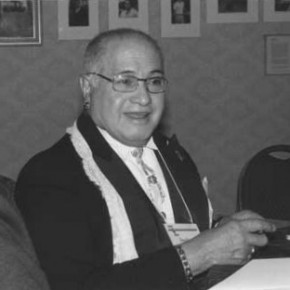 Heroes and heroines fill the LGBT history books. Then there are the countless thousands whose courage and contributions may not have made it into any history books – but have helped make history all the same.

And there are some who’ve written whole pages in those books. Among those was José Sarria, who died, far from the city he helped shape, two days ago. In the 1950s and 60s, Sarria was the soul of the famous Black Cat Bar at the edge of North Beach, where countless people went to be entertained, to be among their LGBT kin, and to be safe – the regular police raids notwithstanding – from a hostile and uncomprehending world outside the club’s doors.

Today, 710 Montgomery, where the Black Cat used to be, houses a “tapas and wine” bar. The building lies only a block from Horizons’ offices, and occasionally I walk by there, once or twice even buying something to eat. One time, soon after we moved here, I went and tried to summon up a sense of what it was like, 50 or so years ago, when Sarria held court. I can’t pretend to have succeeded, but it moved me all the same to stand at a place where LGBT history was made.

Although I wasn’t around then – much less in San Francisco – I can remember reading, many years ago in Randy Shilts’ book The Mayor of Castro Street, about the great Black Cat tradition that Sarria began. As many know, it became the custom for Sarria, in whatever persona he happened to be performing, to lead the patrons in a round of God Save the Queen – but changed to be “God save us nelly queens.” Yes, the language may feel a bit dated now, but I remember the chill I got reading about that ritual, just imagining how vital and powerful that single moment of community, of togetherness, of solidarity must have been for so many.

A life of leadership

José Sarria did far more than sing, far more than gather people in a circle each night. He inspired. He gave courage. He took leadership. He took risks.

In 1961, he ran for supervisor, becoming the first openly gay person to run for public office and laying the initial stones on the path that Harvey Milk and others would later walk. As the incomparably named “Her Royal Majesty, Empress of San Francisco, José I, The Widow Norton,” Sarria founded the  Imperial Court system, which spread over the years to include thousands, all across the country. He founded or co-founded some of the earliest LGBT rights organizations – anywhere – like the Tavern Guild and the Society for Individual Rights.

Maybe I’ll head down the street to No. 710 again today. Those Black Cat Bar years are long in the past, but there’s no question that the Empress’s legacy lives on.