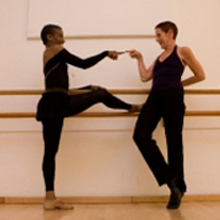 Elvia and Bayan, donors since 2014. Photograph by Rebecca Wilkowski, courtesy of The Potrero View.

Elvia and Bayan met at dance classes in Boston in 1975, where they say the attraction was immediate and that “the sparks began on the dance floor.” Their shared passion for dance quickly morphed into a love story that, since 1976, has been set in San Francisco.

Upon moving to San Francisco, the couple continued to dance and to teach dance, which created a strong sense of community, something that was important for both of them.  Their students – many of whom have gone on to star on  stage and screen – often seek out classes taught by Elvia and Bayan, not only for their skills as teachers, but also for the community that their classes offered.

When Elvia and Bayan began to think about their estate plan, they knew they wanted it to reflect their shared passions, but they didn’t know exactly how to start. So, when both their estate attorney and financial planner suggested they meet with staff at Horizons Foundation, that’s just what they did.

With the help of their personal philanthropic advisor at Horizons, they crafted a legacy plan that speaks to the commitments and issues they care about most deeply. They decided on creating an endowed fund, which will allow their legacy to endure for generations to come.  Their estate will create The Elvia Marta and Bayan Jamay Fund, an endowed fund that will award the Elvia Marta Dance Scholarship to support students in pursuit of education in dance. In addition,  their endowed fund will provide permanent support for meeting urgent needs in the LGBT community, especially in services to seniors and mental health services.

Upon making the plans, they say, “It just felt right.”

Elvia and Bayan carry a sense of community everywhere they go, and they already feel very much a part of the Horizons family. Staff looks forward to being greeted by their hugs, and at last year’s gala, they really cut a rug, much to the delight of the cheering crowd.

We are honored to be home to Elvia and Bayan’s legacy.