Only and Always Together 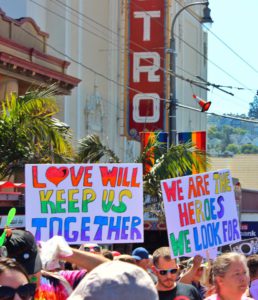 What to make of these past 72 hours? While a major hurricane started bearing down on Texas, the Trump administration signed a directive barring transgender military recruits. The fate of thousands of transgender members currently serving is uncertain, but the ban also forbids these members from accessing something that every other member of the armed forces receives: medically necessary health care.

On Friday, we also witnessed the gratuitous pardon of convicted criminal Joe Arpaio, the notorious former Arizona sheriff. The symbolism is lost on no one as Arpaio has long been a divisive figure, known for his cruelty, racial profiling, and unconstitutional abuse of Latinos.

All this, of course, comes while the outrage of Charlottesville remains raw. And as if that were not enough, some of the same right-wing extremists—white supremacists, neo-Nazis, and others who’d brought hate, havoc, and death to Charlottesville—decided to descend on San Francisco and Berkeley.

Horizons – and the Bay Area – Responds

From the Castro, to Crissy Field, to Civic Center, Berkeley and beyond, people from every walk of life, with every color of skin, origin, gender, sexual orientation – and much more –  stood up and had our voices heard.  We demonstrated that there is no room for extremism or hate in our community. We issued one unified cry:  “Not here, not anywhere.”

Horizons, in collaboration with Cleve Jones, became home to the NoHateSF fund. So far, more than $85,000 has been raised for leading Bay Area groups that advocate for and protect LGBTQ, immigrant, Muslim, African-American, Jewish, and other communities.

The Key to Resistance

The resistance to the rise of extremism – and an extremist administration –has been succeeding – at least to a degree –  because people have been standing up for each other. When immigrants were the targets, not only immigrants themselves protested – millions of their allies did as well.  When health care for 20 million people was threatened, resistance came not just from those who might have lost their coverage, but from millions of others.  When the ban on transgender service in the armed forces came out, angry responses came from our community – and from countless allies as well.

It is that solidarity that must be the bedrock of our opposition and of our building for the world that Horizons stands for:  a world in which all people can live lives of equality, dignity, justice, and joy. Each of us, as LGBTQ people and as committed human beings, can and must stand together, even more than ever.  It’s the only way forward.

With gratitude and in solidarity,