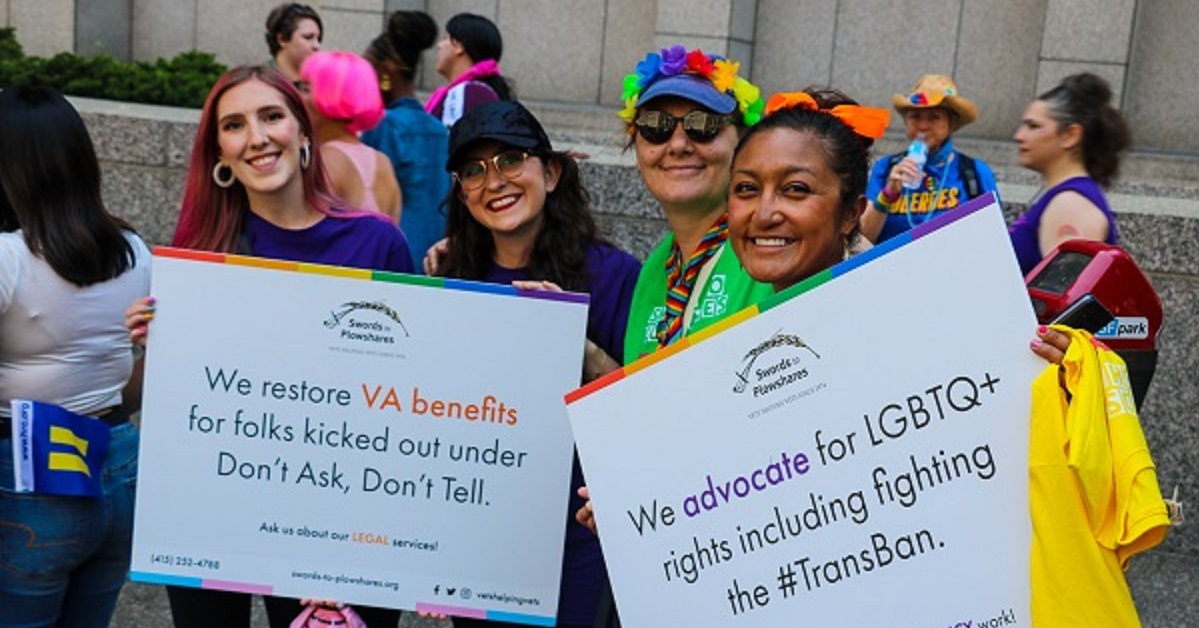 Photo Courtesy of Swords to Plowshares

Founded in 1974, Horizons’ grantee partner Swords to Plowshares, which received its first Horizons grant in 1999, offers hope and support for returning veterans, including supportive housing programs, job training, and legal services. With a mission to alleviate poverty and homelessness among veterans, the organization prioritizes their services to Black, disabled, and low-income service members, serving over 3,000 Bay Area veterans each year, including many who identify as LGBTQ.

Under former President Bill Clinton’s “Don’t Ask, Don’t Tell” policy, many LGBTQ veterans were forced out of the service, left with other-than-honorable discharges, which denied them access to healthcare, disability service, and other benefits offered to military veterans. Swords to Plowshares’ work in the Bay Area has strived to close this gap in access to care and basic needs in order to alleviate the harm done to some the country’s most underserved veterans.

In late September 2021, the Department of Veterans Affairs clarified that LGBTQ veterans discharged under Clinton’s “Don’t Ask, Don’t Tell” policy are eligible for full VA benefits. We talked with the team at Swords to Plowshares to learn more about the effects of this clarification in policy and their LGBTQ work in general.

Q: How do you see the VA’s policy clarification changing the support you provide to LGBTQ veterans? Have you already seen some of the effects of this policy change?

One change we noticed was that the VA modified the VA’s Adjudication Manual to add guidance on when veterans who were kicked out for “homosexual activity” can be excluded from VA benefits. These circumstances, referred to in the regulation as “aggravating circumstances,” include non-consensual sex or sexual contact with someone of a lower rank. Previously, there was no mention in the manual of this regulatory bar to receive benefits. Notably, there is no guidance that heterosexual service members who engage in this same misconduct should also be denied eligibility.

With this new inclusion, we are worried adjudicators may be more likely to deny eligibility to LGBTQ+ veterans even if there are no “aggravating circumstances” in their record, but time will tell.

Q: Are there any unique challenges the organization faces when helping LGBTQ veterans with other-than-honorable discharges due to “don’t ask, don’t tell” opposed to other veterans you serve? How has this status affected the resources you’re able to provide to them?

It is harder to outreach to and connect with LGBTQ veterans than other veteran populations. These veterans are continually outed as gay anytime they provide documentation proving they served in the military. When a servicemember leaves the military, they are issued a one-page separation document – a DD214 – that summarizes their time in service. For those kicked out under DADT and previous homophobic policies, their DD214 explicitly identifies their reason for separation as relating to their sexuality, such as “homosexuality” or “homosexual admission.”

For many, the shame and sadness of being kicked out of the military is embodied in their DD214. As a result, many LGBTQ veterans opt not to share the document, which means exclusion from veteran-specific service organizations, veterans' preference in employment, and VA care and benefits, for fear of rejection, embarrassment, and invasive questions. In addition to the stigma and trauma many experienced during their service and discharge process, LGBTQ veterans may be similarly reluctant to identify as a veteran in the LGBTQ community for fear of an anti-military bias.

This reality limits our Legal Services program’s capacity to reach and connect LGBTQ veterans to the veterans benefits they earned. To help overcome this, we built partnerships with the LGBT Center in San Francisco and the Alexander Hamilton 448 Post, the only LGBTQ American Legion post in the nation. We also have self-help guides geared toward helping those who were kicked out of the military due to their sexual orientation and who seek to correct their name on their DD214, which are available on our website for all to access and utilize while navigating the VA claims process. Lastly, each year, Swords to Plowshares attends Pride events in June to raise our visibility for LGBTQ veterans who might benefit from our services.

Q: How has Horizons’ support impacted the organization and expanded the resources you’re able to provide to your community?

Horizons’ support helped cover salary costs within our Legal Services program so that we could maintain a dedicated staff attorney to conduct outreach and provide services to LGBTQ veterans in the Bay Area community. This support has allowed us to better serve LGBTQ veterans and help more access the federal resources available to them.

Q: Why is it important for donors to support Swords to Plowshares’ LGBTQ work?

LGBTQ veterans are a severely underserved population within the veteran community. Despite being overrepresented in all the risk categories associated with veterans – poverty, homelessness, mental health issues, and suicide – LGBTQ veterans are underrepresented in receiving services and benefits from the VA. According to the VA, LGBTQ veterans experience higher rates of smoking, alcohol, and substance abuse; higher rates of discrimination, stigma, and trauma experiences; and higher risk of mental health illnesses, such as anxiety, depression, and suicide — as compared to non-LGBTQ veterans. The increased risk of high stress levels faced by members of a minority group is compounded for LGBTQ people who serve in the military.

Shortly after the repeal of “Don’t Ask, Don’t Tell,” the Defense Department issued a directive to the military records correction boards, permitting them to remove mention of sexuality from a veteran’s DD214. However, the DOD has failed to outreach to this population to let them know this remedy is available to them, so it is estimated that only 8% of eligible veterans have received corrected DD214s.

For LGBTQ veterans, the need for support is immense. Swords’ staff attorneys are well versed in these injustices in the veteran system of care, and donors support both our direct services to individual veterans and advocacy work to promote equitable access to VA healthcare and benefits for all LGBTQ veterans.

For more information about Swords to Plowshares and to support their work, visit their website at swords-to-plowshares.org.