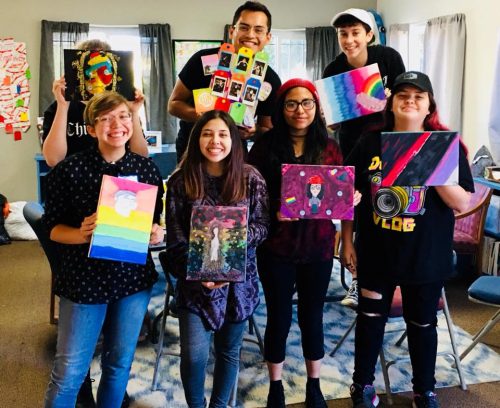 Horizons Grants help create safe spaces so that youth can thrive. This is the story of one young man in Napa County and how his connection to grantee partner LGBTQ Connection changed his life.

“Growing up in Napa County was very different for me. I immigrated to Napa when I was 5, originally from Mexico.  When I came here it was different and for the first part of my life, I was really trying to hide from the world.  Not only did I identify as LGBTQ but I identified as undocumented, so living in those two closets really made it difficult for me to reach my full potential.”

“Even in school – even doing extracurricular activities – I wouldn’t put myself out there. I was living in a bubble I’d built for myself. I was always living in the shadow but then came to the realization that I shouldn’t be hiding these parts that are seated in me. For me, LGBTQ Connection became a second home because it’s a place where I found myself, as a gay man, I found myself.”

“That coming out process was so pivotal and so life changing for me that, after that, I was able to find support in my community, to find resources. I knew for me that coming out as undocumented was a first step in coming out as a gay person. That’s what drove me to come out – to tell the world, this is who I am, me trying to find my identity.”

“It’s important to create visibility. It’s important to be outspoken. One thing that is really impactful is that we tell our stories, that we own our stories.  When we do that, we are able to step into our own power. It’s more impactful when LGBTQ people speak up and share their stories because allies – really, all people realize the struggles that we experience. It changes the narrative, the way people see each other when people speak up, when we fight for the rights we deserve. And so, for those moments when I really put my liberty on the line, I felt so powerful. I came to the realization that I was becoming part of something bigger, something that was going to change the way this world works.”