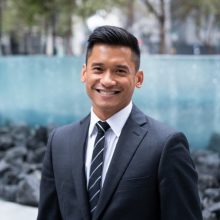 He earned a Bachelor of Science in Business Administration (BSBA) in International Business from the University of San Francisco’s McLaren School of Management in 2007. He became a member of the Northern California Financial Planning Association and obtained his securities registrations Series 7 and 66 in 2015. Manuel is completing a Master of Science in Financial Planning at Golden Gate University’s Edward S. Ageno School of Business, and will sit for the Certified Financial Planner (CFP®) exam after obtaining his MS degree in late 2017.

Manuel spent two years in Munich, Germany as a marketing manager for TEC Leadership Institute, a consulting firm for corporations committed to cross-cultural diversity. He rejoined Hanke & Co. after returning to San Francisco in 2014 to wed husband Christoph Burkhardt underneath the rotunda of San Francisco’s City Hall.

He has been an active member and has served on the board of the Golden Gate Business Association. Manuel is fluent in German, Tagalog and Ilocano (the main native language of the northern Philippines), and is re-learning Spanish. In his spare time, Manuel loves to travel and hike.

Horizons Foundation offers these lists as a resource and not as an endorsement of the qualifications or services of any individual, partnership, corporation, or any other entity listed. We advise you to conduct your own investigation before engaging the services of any of the advisors listed.