The Bridge That Calls Us Together 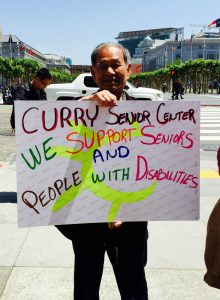 M.J. is the host of the “Revolting Seniors” podcast, produced by Horizons’ grantee partner Curry Senior Center. Curry works with the senior LGBTQ population in the Tenderloin.

“The senior community in the Tenderloin is a pretty large group. In fact, it’s the largest senior community in the city. Unfortunately, most of them are in the closet because as they got older they became vulnerable and they became afraid that if people knew they were gay, that they would be hurt. So we spend all our time in getting people to come out – to participate in programs. Slowly, but surely, it’s working.”

“The two things the senior community needs is a feeling of safety and the next thing is a platform where they can be visible with each other without putting them at risk.”

“We’re doing a podcast at Curry, it’s called “Revolting Seniors.” The purpose of the podcast is to reach out to those who don’t come out.  It’s interesting because people hear the podcast and then want to pick up the conversation later on. The subjects are not exclusively for our community. A lot of the subjects that we tackle are subjects that encompass all seniors. We all come from different cultures. We all don’t see things the same way. But that doesn’t mean we can’t all get along.”

“Horizons name is always coming up when it comes to something connected to the community. It’s always positive. I was pleased that someone who was positive and involved with the community was involved with Curry. Horizons is the thing that props us up. Without Horizons, we probably wouldn’t have is a lot of the things we have for Seniors. It’s like family.”